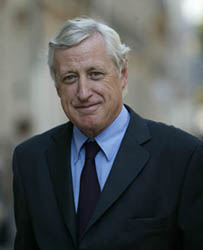 Former Ambassador Pierre Vimont was appointed Ambassador of France to the United States by President Nicolas Sarkozy on August 1, 2007.

Prior to his present appointment, Mr. Vimont was chief of staff to the minister of foreign affairs, a position he had held since 2002.

He was previously ambassador and permanent representative of France to the European Union from 1999 to 2002.

Pierre Vimont joined the Foreign Service in 1977. He was first posted to London where he was first secretary from 1978 to 1981. He then spent the next four years with the Press and Information Office at the Quai d’Orsay.

From 1985 to 1986 he was seconded to the Institute for East-West Security in New York.

Returning to Europe, he served as second counselor with the Permanent Representation of France to the European Communities in Brussels (1986-1990), and was subsequently chief of staff to the minister delegate for European affairs from 1990 to 1993.

He went on to serve as director for development and scientific, technical and educational cooperation and then for cultural, scientific and technical relations. He was deputy director general of the entire Cultural, Scientific and Technical Relations Department from 1996 to 1997 and then director of European Cooperation from 1997 to 1999.

Born in 1949, Pierre Vimont holds a degree in law and is a graduate of the Institute of Political Studies and the National School of Administration (ENA).