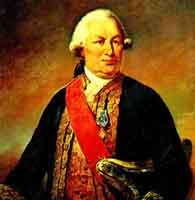 François Joseph Paul, the count de Grasse, was born in Provence, in the South of France in September of 1722. In 1738, he started sailing on galleys belonging to the order of Malta. _ He began serving France in 1740; he fought in the War of Succession in Austria and in the Seven Years War, after which he became captain of a warship. He left for America in 1778. The commander of a squadron the following year, he played a glorious role in the battle of Dominique in 1780 and in the capture of Tobago in 1781. Promoted to commander of the Atlantic fleet, he defeated the English Admiral Graves on September 5, 1781 during a decisive battle in the Chesapeake Bay, which led to the American victory at Yorktown. The following year, fate conspired against him. While planning to seize Jamaica with the Spanish, he found himself face to face with the English fleet commanded by Admiral Rodney. Fighting against superior forces, de Grasse’s battle lines broke. He was forced, after almost eight hours of combat, to lower his flag and surrender his ship, The City of Paris. Taken back to London as a prisoner, he was liberated in August 1782, when relations between France and England improved. While he was disgraced and snubbed at court, a war council acquitted him of any offense. He died in Paris January 14, 1788. To honor his memory, the French Navy launched a cruiser in 1938 bearing his name.
top of the page
Tweets by @franceintheus