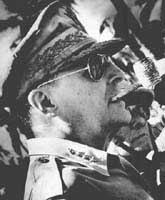 Everyone recalls General MacArthur’s "I shall return" speech from 1942, when he was forced to leave the Philippines to escape the Japanese offensive. Less well known, however, is the fact that the old soldier was born into a military family and fought in France during World War I. The future hero of Corregidor in the Philippines was the vanguard when the 84th infantry brigade that led the charge on Saint-Mihiel, near Metz, in September of 1918. For his his leadership and bravery, he soon became commander of the 42nd Division.After the Armistice, he became superintendant of West Point Military Academy; he had graduated from the Academy, first in his class, just fifteen years earlier. Promoted in January of 1925, the 45 year-old native of Little Rock, Arkansas, became the youngest General in the American Army. In 1930, President Herbert Hoover appointed him Army Chief of Staff. Then, in July 1941, President Franklin D. Roosevelt made him commanding General of U.S. forces in the Far East.
top of the page
Tweets by @franceintheus