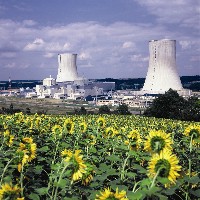 The history of nuclear science in France goes back over one hundred years. It began in 1896 when Antoine Henri Becquerel first discovered natural radioactivity. Since that time, a long line of French scientists (including Pierre and Marie Curie) have developed the technology for creating artificial radioactivity and for harnessing the power of nuclear fission. In 1945, under the leadership of General de Gaulle, the French government founded the French Atomic Energy Commission, or the CEA (Commissariat à l’Energie Atomique). In 1956, a joint project between the CEA and state-owned Electricité de France was launched to develop the first all-French commercial nuclear reactor, based on natural uranium gas-graphite technology. Less than 10 years later, in 1964, the first power reactor, EDF1, was operational at Chinon (on the Loire river). Possibly the most important event in the rapid development of France’s nuclear energy industry was the oil crisis of 1973, in which oil prices sky-rocketed, causing the world economy to slump. This crisis made it crystal clear that reliance on fossil fuels was too risky for France’s economy, and so alternative energy sources, particularly nuclear power, were explored. In 1974, the French government launched an aggressive nuclear power program, based on the promising pressurized-water reactor technology, that led to the standardization of the French nuclear reactor fleet. Such standardization made it much easier to replicate and operate power plants, thereby reducing costs and safety risks. Nuclear power has now essentially replaced all fossil fuel plants in France, and is substantially dampening the ill effects of recurrent oil price instabilities on the French economy.

Nuclear power has, counterintuitively, helped contribute to sustainable development. When used with proper care and responsibility, nuclear plants have a minimal direct impact on the environment. Indeed, France now has one of the lowest levels of CO2 emissions per capita in the world. While the U.S. produces over five metric tons (carbon equivalent) of CO2 per inhabitant, France produces less than two. There has also been a 75-percent decrease in sulfur dioxide, which is responsible for acid rain, and had France not converted to nuclear energy, the emissions of smog-creating nitrous oxide would be 20 percent higher. The Ministry of Industry states that French nuclear energy prevents the emission of 1.7 tons of sulfurous oxide and 890 tons of nitrous oxide every year. Finally, nuclear power plants typically have a much larger capacity than similarly sized fossil-fuel plants (the last four nuclear reactors built in France have a capacity of 1,450 MWe) making it possible to serve more territory with fewer intrusive facilities.

Scientific Successes in the Nuclear Industry

Having invested more than $160 billion in its nuclear program over the last 20 years, France has become a world leader in nuclear energy. Its production has steadily increased since 1973, going from about 20 TWh (billion kilowatt hours) to 425 TWh in 2003. Today, 59 nuclear plants produce 78 percent of the entire country’s electricity, and France is the largest exporter of nuclear electricity in the European Union (with total exports of 115.2 TWh in 2003). France is second in the world (behind the United States) in terms of total nuclear power generation, contributing 15.9 percent of the world’s nuclear electricity.

This rapid growth was possible due to the development of new technologies that ensured the increasing safety and efficiency of nuclear plants. After the first generation (built in the 1950s) and the second generation (in place today), engineers and researchers are currently hard at work on the third and fourth generations of nuclear plants. In 2007, the construction of France’s first third-generation reactor (EPR), which was designed with heightened safety measures in mind, began in Flamanville, Normandy. In response to concerns over fossil fuel reserves and energy independence, France joined nine countries in 2001 and launched the "Generation IV International Forum" to lay the groundwork for new, safer, cheaper and more environmentally friendly fourth-generation reactors that could be in place by 2040. At the forefront of the nuclear industry, France is well poised to help address global concerns over power resources, the environment, and nuclear safety.

top of the page
Tweets by @franceintheus