Atalanta entails the deployment of a naval force for a period of 12 months in a zone covering some 2 million square kilometers, extending from the southern part of the Red Sea to the Gulf of Aden and the Indian Ocean, along the Somali coasts.

Altogether, 10 EU countries are participating, including 5 nations that bring a continuous operational contribution – Germany, Spain, France, Greece and the U.K. This naval force, EUNAVFOR, includes 4 to 6 warships, 3 to 5 aircraft (helicopters and maritime patrol aircraft), as well as some 1,200 military personnel. France contributes a destroyer on a permanent basis, as well as a Maritime Patrol Aircraft, “Atlantique 2.” It also offers logistical support to the operation from its pre-positioned base in Djibouti. The Operational headquarters located in Northwood (U.K.) is headed by a British admiral. For the first four months, the force will be led by a Greek admiral deployed on a Greek warship.

Atalanta has three objectives: the close protection of the UN World Food Program ships delivering well needed food items to displaced populations in Somalia; the close protection of vulnerable vessels transiting off the Somali coasts; the surveillance of Somali waters and coasts to detect any threat to maritime traffic, and to deter, prevent and repress acts of piracy.

Since the start of Atalanta on Dec 8, many acts of piracy have been prevented. In early January, the French frigate Jean de Vienne foiled two piracy attempts in the Gulf of Aden, while French Navy commandos captured 19 pirates as they were trying to intercept a Croatian and a Panamanian cargo ships.

The French Air Force in Nevada for Red Flag 2008

Two Red Flag exercises will take place at Nellis Air Force base, Nevada, during the summer 2008. Around 400 military aircrafts from the USAF and several allied countries will gather for this realistic combat training exercise, to which France will participate aside India and South Korea, from August, 11th to August, 22nd. The French Air Force will provide several Mirage F1, Mirage 2000 as well as four Rafale.

Furthermore, before getting to Nellis, the French aircraft will take part in an exclusively French-American exercise on Luke AFB, Arizona from July 23rd to August 6th 2008. This will be the first exercise of this kind for both French and American Air Forces, the goal being to test the interoperability between French and American weapon systems. 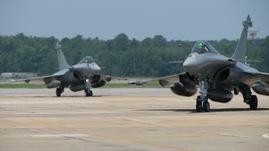 Six French Navy Rafale fighter jets landed at NAS Oceana (Virginia) on June 28, 2008. They flew from NAS Landivisiau (France) via the Azores Island in six and a half hours. The escort and three in-flight refuelings were provided by two French Air Force KC-135. 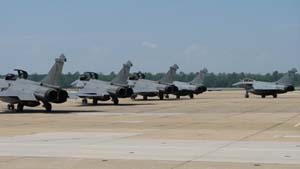 The Rafale are participating in exercise JTFEX 08-4 designed to bring up to date the operational readiness of the US aircraft carrier Theodore Roosevelt’ Carrier Strike Group. To that end, the French fighter jets will be embarked in CVN Theodore Roosevelt from 18 to 23 July, 2008.

1/ France has contributed to operations in Afghanistan from the very outset. It was in command of ISAF (for six months in 2004) and of the Kabul region (between September 2006 and April 2007). A 200-strong Special Forces contingent operated in the southern and eastern regions alongside US Forces until Feb 07.

French Forces indeed are playing a key role in Afghanistan with a total strength of about 2,000 soldiers, airmen and sailors. More specifically, French troops are responsible for the security in Kabul, home of Afghan institutions, and in some of the most difficult sectors in the Kabul region, such as Surobi, on the strategic axis leading to Pakistan.

Under the leadership of French President Nicolas Sarkozy, it has been decided that France would first remain committed to Afghanistan as long as required, and then significantly increase its military contribution. Were decided or confirmed:

The authorization for French troops to intervene on a as-needed basis outside Kabul to assist allies in difficulty, as first agreed upon at the NATO summit in Riga, Nov 06;

The deployment of three additional Operational Monitoring and Liaison Teams with the Afghan Army. As of Jan 08, 4 French OMLTs (200 soldiers) operate in Afghanistan;

The regrouping of the French Air Force Detachment in Kandahar, which took place in the fall 07, to facilitate coordinated ISAF operations and improve the overall efficiency.

The deployment of a fifth OMLT of about 80 soldiers, in support of the Dutch Forces.

A French-German cooperation aimed at setting up Logistics and Engineering Afghan Military Schools.

Including above-cited reinforcements, the French Forces make up a very substantial presence:

40 troops with the Afghan Army Training Unit part of OEF. Since 2002, 4968 Afghan officers have been trained by this detachment.

Back in July 2007, for the first time in naval aviation history, the French Navy Rafale M12 and M13 landed on the deck of the US nuclear aircraft carrier USS Enterprise off the French port of Toulon. These two aircraft were able to launch again from the US CVN, thus opening the path to a close French-American cooperation in naval aviation, which allows French Navy pilots to train while CVN Charles de Gaulle is undergoing a major overhaul.

In order to further the FR/US interoperability between the two Navies, on May 21, 2008, the United States Navy invited again two French Navy Rafale fighters and one 2E-C Hawkeye to take advantage of the US aircraft carrier Harry S. Truman’s port visit to Marseille, France, to conduct launch and recovery operations aboard the US Navy ship. This coming July, another six French Rafale and two Hawkeye are scheduled to fly to Norfolk to train aboard the US aircraft carrier Theodore Roosevelt.

The Task Force is a multinational coalition naval force established in the wake of the 9/11 attacks in the United States. Its mission is to monitor, board, inspect and stop suspect shipping as part of the war on terrorism. It prevents terrorists from using the sea as a venue for terrorist attacks or an enabler for terrorist attacks ashore. It includes operations in the Indian Ocean in support of Operation Enduring Freedom. These activities are referred to as Maritime Security Operations.

Countries presently contributing to CTF 150 are Canada, France, Germany, Pakistan, the United Kingdom and the United States. Other nations who have participated include Australia, Italy, the Netherlands, New Zealand, Portugal, Spain and Turkey.

The command of the task force rotates between the different participating navies, with commands lasting between four to six months. The task force usually comprises 14 or 15 vessels.

top of the page
Tweets by @franceintheus